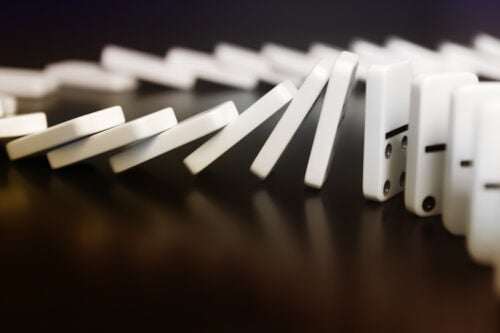 The BVA is a creature of habit - and they have long been in the habit of making mistakes. In fact, something like 70 - 75% of all BVA decisions appealed to the Court of Appeals for Veterans Claims (CAVC) are reversed or remanded for some legal or factual error.

Since the passage of the Appeals Modernization Act, the BVA has been flying through decisions.

If the first point is peanut butter, and the second point is chocolate, then here's the Reese's Peanut Butter Cup:

Here's an error that the BVA made before Appeals Modernization was passed into law.

Since the passage of that veterans benefits law, I see this error almost every single week in BVA decisions.

In a nutshell, the mistake is the BVA fails to properly adjudicate a Continuity of Symptomatology argument.

What is Continuity of Symptomatology?

Going back to our "VA 101" training, there are generally two ways to prove direct service connection.

The first path is to show, with medical evidence in the form of a medical expert opinion, that there is evidence of a nexus between a current disability and an event, disease or injury, or illness in service.

The second path is to show, through lay evidence, that a veteran has had continuous symptoms of a disability from service to diagnosis. Now, it used to be that this proof worked for all types of claims. If a veteran showed that he had a chronic condition, and continuous symptoms from discharge to diagnosis, then direct service connection would be established -- without the need for an expert opinion on nexus.

However, some years ago, the U.S. Court of Appeals for the Federal Circuit (the FCOA) issued a decision finding that this proof only applies if the evidence to chronic conditions listed in 38 C.F.R. §3.309(a).

The critical difference is that when the evidence establishes that a veteran has a chronic condition listed in 38 C.F.R. 3.309(a), the service connection may be granted, and VA benefits paid, on lay testimony alone, by testifying credibly that he or she had continuous symptoms from discharge to diagnosis.

How does the BVA err when addressing Continuity of Symptomatology?

You are going to see a very clear pattern when the BVA makes this mistake in a VA disability compensation appeal.

Here, generally, is how it will appear:

"The veteran also asserts that he's experienced continuous back pain since he left service. The Board determines that the veteran was not competent to offer an opinion on the complex medical question of whether his current arthritis was caused by in-service injuries. It also found that these assertions were not credible because they were inconsistent with the evidence. Specifically, Mr. Veteran's separation exam was normal for the back, and he denied related symptoms at separation."

That's not a direct quote, but you can see the pattern of errors.

BVA Error #1: The veteran is not competent to offer an opinion on the complex medical question of whether arthritis is caused by the in-service injuries.

That's true, generally, but it falls into the "Who Cares" category when the legal issue is "continuity of symptomatology." That is because the veteran's testimony of continuous symptoms from discharge to diagnosis is not testimony establishing medical nexus or a medical proof of service incurrence of a disability, but his or her first-hand personal experience with the symptoms of a particular condition.

A veteran is ALWAYS competent to say how and when he experienced symptoms of a medical condition.

BVA Error #2: The veteran's assertions were not credible.

This error drives me nuts.

First of all, saying a veteran lacks credibility is a pretty serious accusation. A veteran's honorable military service commands respect, and deserves more than the flippant observations of an administrative hearing officer slamming through 85 decisions in 90 business days.

In fact, the CAVC has said that before the BVA can find a veteran lacks credibility, it must provide a foundation for that finding.

Simply stating that a veteran's statements are inconsistent with some broad reference to "evidence" is not the foundation the BVA must lay if it is going to take the serious step of finding a veteran lacks credibility should not be enough to survive CAVC review.

BVA Error #3: The veteran's assertions ... were inconsistent with the evidence.

Continuous treatment is irrelevant to the analysis of whether or not a veteran has established continuity of symptomatology from discharge to diagnosis. Likewise, evidence that a condition or its symptoms were or were not noted during service or in service medical records is irrelevant to establishing service connection based on continuity of symptomatology.

In fact, by comparing symptoms to treatment, the BVA is actually rendering an unlawful medical opinion, by saying that the symptoms are of the type for which a person would seek medical treatment.

And, though it does so hundreds of time each day, the BVA violates the law when it renders its own medical opinion to deny a veteran's appeal.

Summary: What do you do when the BVA makes this error in a BVA decision?

In fact, the example quoted above came from a CAVC Memorandum Decision where the veteran represented himself. A case that should have been remanded, from what I can tell of the decision, was instead lost.

If you are an attorney representing veterans before the BVA or Regional Offices, consider asking an attorney experienced with appeals to the CAVC to represent your client.

While most attorneys certainly understand the legal issues at play, arguing error to the CAVC is a whole different type of advocacy than arguing errors to the BVA. CAVC appellate advocacy requires completely different skillsets. Veterans law, while always the same, is argued in very different

If you are a regular practitioner before the BVA, you should focus your energy and talent on learning and applying the unique skillsets that will make you a successful BVA attorney.

In fact, if Attig | Steel was handling your CAVC appeals, we would talk to you - or your attorneys - about some tips that might help to avoid this type of error at the BVA.